One of the most common questions we get, often with a lot of curiosity, is if we’ve ever done engagement photos at night. Or, more precisely, if it’s possible to do nighttime downtown Kansas City engagement pictures. And to be honest? We get so stinking excited when our couples ask if we can do a nighttime engagement session in downtown KC. In fact, whenever this question comes up, Kyle often winds up telling our couples:

“Of course! I actually like shooting at night better than during the day!”

So today, as we share some of Arica and Sami’s nighttime downtown KC engagement pictures with you, we thought we would also share a few reasons why nighttime sessions are so cool. And why 9 times out of 10 we will always, always be on board for doing a nighttime session.

1. Not everybody does it

2. It’s often how our couples see the city when they start dating

You know how they say that smells and sounds can bring up long-forgotten memories for people? We think that doing something romantic in a specific spot after dark is the same way. So often when couples start dating, they meet at night. For cocktails or late dinner. To go out to dinner with a group of friends, or to see a concert or show. We LOVE shooting engagement pictures at night because it so often takes our couples back to that time in their relationship when they  had just started dating. And, to be honest, there’s nothing cooler than seeing our couples relive some of those early memories at some of their favorite places.

Let’s face it. Downtown Kansas City is not the same place it was 10 years ago (thank goodness). Especially at night, downtown KC is magical. And when you add in the lights and sounds of the city after dark? Whether you’re in the middle of Power and Light or looking out over the city skyline and the classic Western Auto Building from Liberty Memorial, our city is just beautiful. And at night? All of the not so pretty and grungy fades away and you’re left with all of those gorgeous twinkling lights. Which, if we’re being honest, are PHENOMENAL for engagement pictures.

#fact. We live in the midwest and it’s often stupid hot during the daytime. Which means if you want engagement photos taken in the summer? Let’s wait until the sun goes down. There’s no glaring, hot sun beating down on you. The concrete has cooled off, and often, there’s a nice cool breeze floating through the city.

So often engagement pictures are scheduled for golden hour. And depending on the time of year? That can sometimes fall during rush hour. Or cocktail hour. Which means all of those iconic Kansas City places you want to visit for your engagement session? Are going to be absolutely PACKED. But, if you wait until the sun goes down? You’ll have the place to yourselves, and will wind up with photos no one else has. You won’t be fighting field trips or school groups, or 10 other engagement sessions either. And, if you REALLY want to get city photos and hang out in the middle of the street? There’s so much less traffic to have to worry about.

6. Photos are more intimate and romantic

I don’t know about you, but for whatever reason, whenever the sun goes down or the lights go out? People are more likely to loosen up and enjoy themselves more. Show more PDA. Share a kiss a little bit longer. Which means your after dark engagement pictures? Oh friends. It may be cooler outside but you and your honey are going to be blazing with romance and chemistry. Which means you’ll have the most romantic engagement pictures ever.

Hear me out here, we’re still in a big city at night. So of course we take extra precautions. But, as long as you stick to some of the more common areas and main spots? It’s totally safe. And, see number 5. There’s a lot less traffic to have to worry about dodging.

Arica and Sami – we can’t even wait for your wedding this October! Thank you so much for trusting us with your engagement and wedding pictures friends! 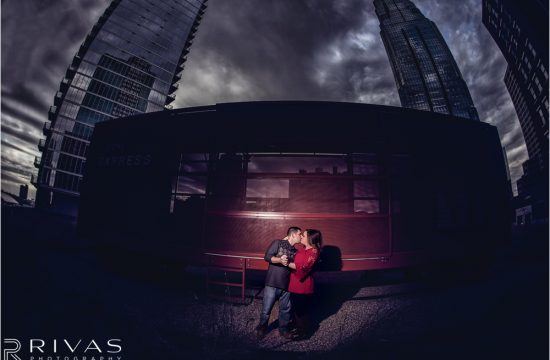 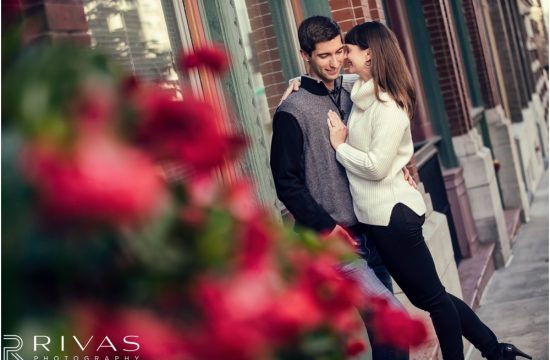 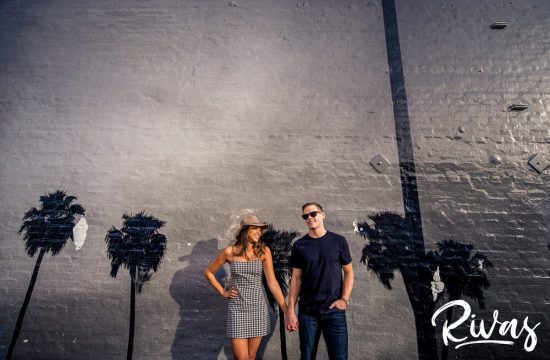